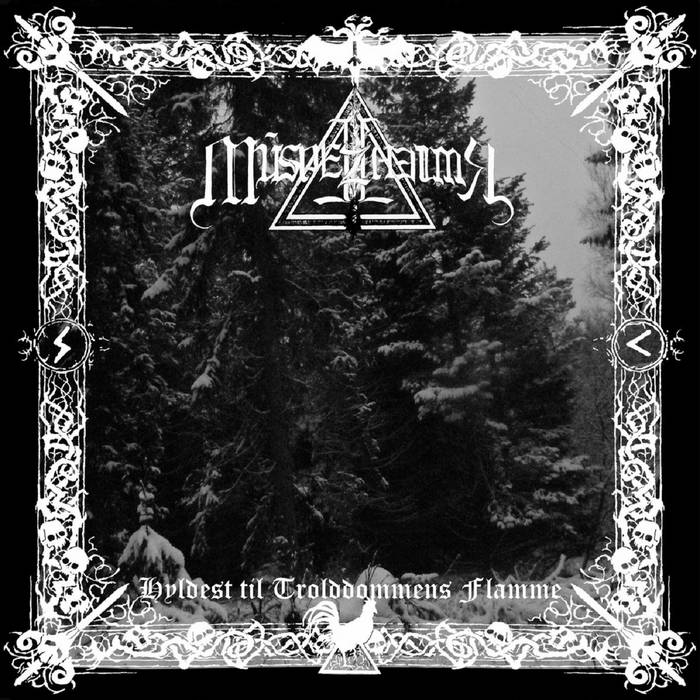 
LUNAR APPARITIONS, in conspiracy with Amor Fati, is proud to present a special collection from Denmark's mysterious MÚSPELLZHEIMR, Hyldest til Trolddommens Flamme / Demo Compilation, on 2CD format. Just as its title suggests, this double-disc set collects Hyldest til Trolddommens Flamme, the band's debut album from 2015 and out of print on all formats, as well as the previously digital-only Demo Compilation, making for a staggering display of elite black metal mysticism.

MÚSPELLZHEIMR are the new, blurred-out face of Denmark's fast-rising black metal scene. Only the purest and most traditional black metal is utilized within this idiom; however, the band's vision - and those of their close comrades - is boundless, thus making the "old" new and vice versa, like the ouroboros forever devouring its tail. MÚSPELLZHEIMR's majestic, mystical black metal is much like that: starkly vast, circular, hypnotic, buried deeply in the abyss, both in the physical and spiritual senses.

Originally released in 2015, Hyldest til Trolddommens Flamme was MÚSPELLZHEIMR's bolt-from-the-blue full-length debut, a veritable Ground Zero for this exciting development within black metal's deepest underground (and which largely revolves around the Afgrundsvisioner nebula of predominantly Danish and Swedish artists). Immediately instilling austerity and iciness but soon burning hot with a passion and poignancy that's blanching to behold, Hyldest til Trolddommens Flamme is a dizzying yet feverishly melodic rumination on the mysteries of nature and the beyond. Its frequent detours into placid, acoustic-led territory is forever haunting, as well as the band's overall grasp of dynamics: truly, this is the work of actual humans who play as a band rather than the sterile cut 'n' paste (or worse) of so much nowadays "black metal"; paradoxically, this decidedly "un-human" human touch is refreshingly life-affirming whilst losing none of black metal's core misanthropy. At 42 time-evaporating minutes, the album hovers and then smothers - truly, an experience that eternally etched MÚSPELLZHEIMR's name into modern legendry.

Released earlier this year by Afgrundsvisioner but only digitally, the equally lengthy Demo Compilation includes three incrementally rawer iterations of Hyldest til Trolddommens Flamme tracks as well as two raw iterations from MÚSPELLZHEIMR's third album, Raukun. Fervent fans from the beginning, LUNAR APPARITIONS is honored to bring together these two works on 2CD format, giving a timely glimpse into past, present, and future.